My Review of Joanna Howard’s On the Winding Stair 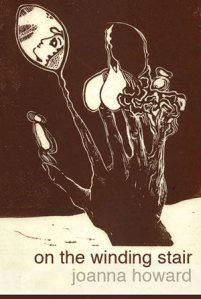 I’ve always wanted to have work in The Brooklyn Rail. And I’m happy to say it’s happened now. Please check out my review of Joanna Howard’s On the Winding Stair. An excerpt:

While certainly sharing similar themes with Angela Carter, Shelley Jackson, Rikki Ducornet, and Kelly Link, Howard’s style suggests Mervyn Peake, Jorge Luis Borges, and Michal Ajvaz, and Nabokov at his extreme descriptive best, as well a shared affinity for disjunction and refraction reminiscent of John Ashbery, all while gazing perspicaciously at language through the same loupe that master-jeweler Wallace Stevens used. Howard’s stories are, as one of her characters says, like “going through a maze, you can make so many turns. You may get to the center, but it would take awhile. At some point along the way, maybe you forget the center.” In short, Howard’s stories are, modifying a phrase from her book, “lovely views from harrowing ruins.”

This entry was posted in Uncategorized and tagged Joanna Howard, On the Winding Stair. Bookmark the permalink.