Review of Mary Caponegro’s All Fall Down 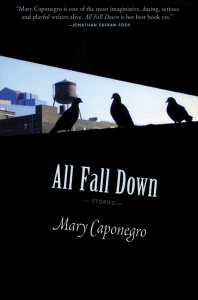 Easily one of last year’s finest books, Mary Caponegro’s All Fall Down is a powerful display of a virtuoso stylist at the top of her form. Here’s an excerpt of my review:

With a precise eye, sympathetic ear, and a commanding, sprawling, and, at times, overwhelming but no less pleasurable voice, Mary Caponegro, in her new collection of stories and novellas All Fall Down, probes the minds of an odd collection of characters: a couple whose marriage is headed toward dissolution; a man torn by conflicting allegiances to his wife and mother; two other lovers whose new relationship is ravaged by the onset of illness; a woman who just can’t seem to let her daughter go; children who, in a fantastic, disturbing turn, run an abortion clinic; and, lastly, a crusty, dispassionate academic. These are flawed people, raw like flensed skin, and, as in the case of the kids running the clinic, oddly neglected. They are selfish and unaware, or self-aware but uncaring, or hyper-aware yet still encumbered by their history, their territorializing, their devotions, their supposed obligations. While the characters in these stories have much to be glum about, Caponegro’s insistent lyricism, scathing humor, and remarkable precision always impresses, always reminds the reader of the possibilities of fiction as a vehicle for psychological exploration. Sure, many contemporary novels are promoted as “psychological,” but Caponegro, with a style equally indebted to Virginia Woolf and William Gass, distinguishes herself by ably capturing the psyche’s complexity, its unpredictability, its darkness, its disquieting mystery.

Like Loading...
This entry was posted in Uncategorized and tagged All Fall Down, Mary Caponegro. Bookmark the permalink.