Review of John Haskell’s Out of My Skin 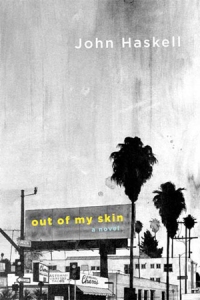 Check out my review of John Haskell’s Out of My Skin, one of the few books from last year I reviewed from the so-called major presses. Here’s an excerpt:

Out of My Skin is unquestionably brimming with metaphysical, epistemological, and psychological asides and glosses. It also overflows with humor of the deadpan, sardonic variety. It’s also a thoroughly engrossing love story, one that never lapses into sentimentality. And, while Haskell manages to get away with large doses of philosophical inquiry, he also convincingly allows the first-person narration to inexplicably, yet seamlessly, flow into an omniscient point of view. Just before walking into the patio where Jane, his lover, is, the narrator relates that “Jane thought to herself that the past is the past and the world does what it wants to do.” And later in the novel he goes into her mind for pages: “Jane is feeling a numbness in her mind, and because that numbness is spreading to her body, and because she wants to feel something other than numbness, she agrees to go.” This heightened awareness and these sudden moments of omniscience are never explained; but the narrator’s voice, governed by a slanted perception of things, is so convincingly drawn that the reader absorbs it with hardly a second thought.

This entry was posted in Uncategorized and tagged John Haskell, Out of My Skin. Bookmark the permalink.